We arrived at Elton church on a beautiful summer evening to meet our host Jane Brown who gave us an interesting talk about the history of the church and Elton.

The stained glass windows in the church are beautiful and very detailed – they were made by 4 of the most important glass artists of the time and have all been restored to their former beauty. There are five bells in the church, three of these were cast by Tobie Norris who set up Stamford Bell Foundry. 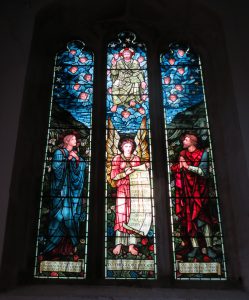 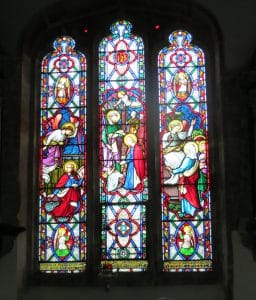 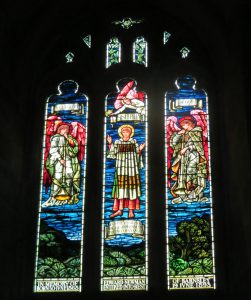 After the talk we were provided with tea, coffee and cake which was delicious, especially as we were encouraged to indulge in a second helping! We split into two groups – the first group walked across the field to Nether End to see the site of a Saxon Manor House and across to Warmington Mill, then back up Middle Street to the church.

The second group walked along Overend (the main street through the village).  Almost opposite the church is the former home and foundry of James Hayes who designed and made the first straw elevator, and in the Church archives we were able to see a copy of the original plans for this.  We also saw the Cooper hospital almshouses which were built to house some of the village’s poor, and Carr’s Farm House, a very handsome house built of Ketton stone.  Sadly we couldn’t appreciate fully the front of the house as it was partly obscured by trees and bushes. Finally we took a look from the road at Elton Hall which is the ancestral home of the Proby family.aggrecultual