With the advent of the first light evening meeting of the year and the attendance was good. Our speaker for the evening was Mr Alan Peasgood Historian and archivist at St Marks.

During the early 1800’s with the arrival of the railways Peterborough was a rapidly expanding City. Worship in the City was limited to the Cathedral and St Johns Church off Market Square.The Church commissioners realised new Churches were needed to accommodate the population. Two new churches were commissioned St Marks and St Marys.  Built on land  that was then, mainly rural and already owned by the Church, St Marks was consecrated on September 26th 1856. 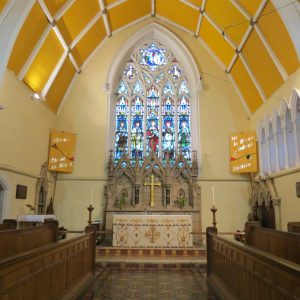 The architect was Edward Ellis of whom little is known. The builder was a Mr John Thompson who’s firm built properties nationwide. Mr Thompson became the first Church warden and later became Mayor of Peterborough for four years. The design as with many built during that era was Gothic revival, with the tower and spire on the East end so as to dominate the skyline from three directions. 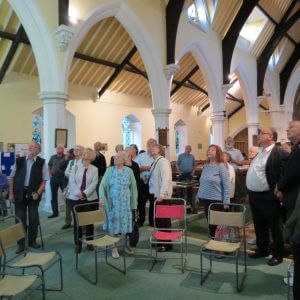 When it opened the Pews could seat 660 in the congregation. The churches dormer windows were added in 1906 to celebrate the 50th anniversary. Many of the beautiful stains glass windows were donated by some of the City’s prominent families and were made by the renown Whitefriars Glass company.

After a talk about the history illustrated by slides we crossed to the Church itself to continue with the evening. Mr Peasgood pointed out architectural points of interest around the church. The Church record were on display for anyone to browse through. And a booklet of the history written by Mr Peasgood was available to purchase.

Our thanks go to Mr Peasgood for an illuminating evening and to St Marks for providing the evenings refreshment.More about St marks can be found on their website-http://www.stmarkspeterborough.org.uk